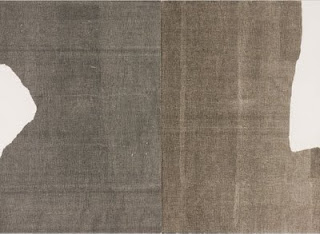 Printmaker, Robyn Hassall, creates subtle vestiges of the landscape. Her abstractions remind one of a reflection in a pool or the curve of a rock. It is peaceful work founded on close observations of the structures and patterns that permeate the natural world.  Hassall employs a wide range of print techniques. For example, Canopy, 2005, is created by multiple impressions of 'onion bags' onto an inked plate. Hassall first studied film (achieving a Diploma of Visual Art) at Swinburne University of Technology before  turning to a career in art teaching. In 2006, she attained a MVA (Master of Visual Arts) from La Trobe University. Hassall has exhibited widely in regional Victoria where she is based. In 2001, Hassall was selected for the Emerging Artist Exhibition at the Eighth International Works on Paper Fair in Sydney. Her upcoming solo exhibition is scheduled for early 2010 at Woodbine Art, Malmsbury.