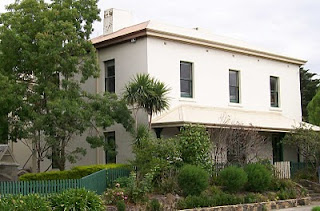 The Darebin Bridge House, where Ian Fairweather painted in Melbourne during the mid-1940s 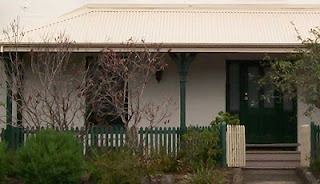 Detail of the front veranda where he sat reading
The monograph on the life and work of Ian Fairweather, 1891-1974, by Murray Bail, first published as Ian Fairweather, 1981, was revised and reprinted as Fairweather in 2009.  In both editions, Bail commences by stating, 'His art does not fit the local boundaries'. However, boundaries are mutable and Ian Fairweather could be considered an exceptional artist within Australian art history. Fairweather, who lived his life attuned to notions of Eastern asceticism, painted the seminal late works over an approximate twenty year time-span while living at a bush camp on Bribie Island (near Brisbane, Queensland). Whilst the tonality of his linear semi-abstract paintings reflects the landscape he inhabited, the work was also constructed by an individual living 'rough' with limited resources, isolated in the Australian environment. Australia was settled under such conditions and generations of settlers in remote rural areas were left with no option but to 'make-do' and improvise with materials at hand.  This notion of the 'thrifty' improviser was capitalised in constructs of the early mainstream national identity. Fairweather favoured economic 'everyday' materials including cardboard, newspaper, cheap powdered paints and house painters' brushes. All art reflects much about the maker and Fairweather's spare, beautiful, unpretentious works additionally reveal a 'shanty' quality within his improvised methodology which could be viewed as austerely or aesthetically reflective of his living quarters.

Fairweather, in my opinion, is amongst the greats of mainstream Australian art including Tom Roberts and Sidney Nolan. It is interesting to note that all three painted in a direct manner with a distinct lack of pretension. Qualities traditionally associated with historic concepts of the Australian improviser. Furthermore, Fairweather has been an influence to later generations of abstractionists, commencing significantly with Tony Tuckson, whose late works also convey these same qualities.
Labels: title Ian Fairweather
Newer Post Older Post Home