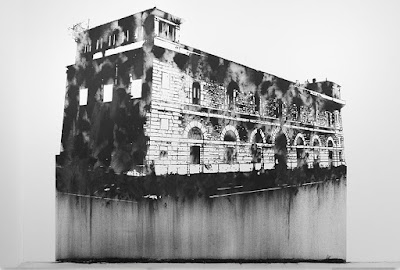 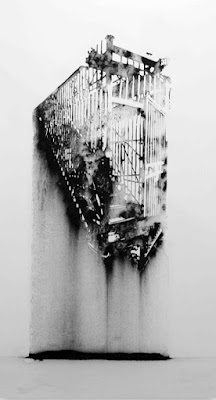 'Artist-Vandal, Nicolas Daubanes finds in the plastic precarious of his work a way to upset the power and authority of his subject. The drawing is not in proper drawing but rather laid, suspended from the paper, held by the only force of attraction of a magnetic surface. The pattern is first cut into a magnetic sheet, then placed on a metal plate and covered with white paper. The iron filings is then distributed to its surface and fixed by magnetization by mechanical marrying the form of the pattern. The weak balance of the material has the effect of making the drawing potentially ephemeral, itself trapped in a visibly fallible device, which cannot afford a second of release. The obvious non-durability of the building is supported by the irregularities of the line, which reveal more blurred surfaces, in a rendering close to an old postcard. The threatening impression left by the first sight then succeeds the feeling of an almost touching vulnerability to these buildings of the past, about to collapse.'
Florian Gaité, instructions for the FRAC Occitanie Montpellier (extract).
Labels: title Nicolas Daubanes Jdp
Newer Post Older Post Home