Of the many, many, wonderful paintings by Cy Twombly, I find I keep returning to the early works. Below are two good examples of both the 'white' and 'blackboard' works from the 1950s. 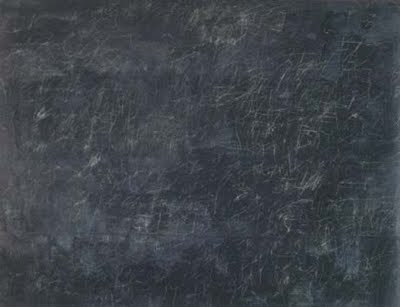 He was also a great sculptor of the intimate.

American painter Cy Twombly dies
American painter Cy Twombly, a key figure in the post-war abstract art world, has died in Rome after suffering from cancer for a number of years.
Twombly, 83, was best known for his canvases that combined painting, drawing and calligraphic texts - many of them reflecting classical themes.
Italy's Ansa news agency reports the artist had been hospitalised in Rome for a few days and had wanted to be buried in the city.
"The art world has lost a true genius and a completely original talent, and for those fortunate enough to have known him, a great human being," said Larry Gagosian of Gagosian Gallery, which represented Twombly.
"We will not soon see a talent of such amazing scope and intensity.
"Even though Cy might have been regarded as reclusive, he didn't retreat to an ivory tower. He was happy to remain connected and live in the present."
Gagosian added that Twombly, who divided critics throughout his life and often refused to fit in with the trends of the day, never lost his sense of humour and always remained humble.
He settled permanently in Italy in the late 1950s as the art world was heading in the opposite direction - from Europe to New York, a move the New York Times called "the most symbolic of his idiosyncrasies".
Mixed reception
Twombly never had an easy ride with art experts, who questioned whether his calligraphic style and use of words and graffiti in paintings were worthy of a place at the high table of 20th century abstract art.
But the figure who shunned publicity was a star of the contemporary art world by the time of his death.
The Art Gallery of New South Wales owns one of his paintings.
The National Gallery of Australia owns a 400-kilogram bronze sculpture by Twombly.
It is a strong example of his use of classical themes.
The word "Victory" is inscribed below a soaring sail-shaped arc that crowns the large work.
Less than two months ago a Twombly work from 1967, Untitled, sold for $US15.2 million ($14.2 million) at Christie's in New York.
And last year he was invited to paint the ceiling of the Salle des Bronzes at the Louvre in Paris, only the third contemporary artist to be given such an honour.
The resulting work was an abstract composition on a blue background complementing Georges Braque's ceiling in the adjoining gallery.
On it appeared the names of the most celebrated classical Greek sculptors of the fourth century, underlining Twombly's fascination for classical art and history.
Twombly was born in Lexington, Virginia, in 1928. He studied in a number of US art colleges before travelling extensively in Europe.
He served as a cryptologist in the US military in the early 1950s.