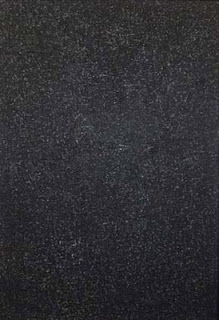 Untitled, 2004, by Allan Mitelman, was featured in the BLUE CHIP: The Collector's Exhibition, showing at Liverpool Street Gallery, during June, 2010. Mitelman also held the exhibition,  A Selection of works on paper and paintings, in October, 2009, at the Australia Galleries, Smith Street Gallery. Mitelman's work is best seen in person. The works convey an arresting quality and can hover between non-objective minimalism and presenting painting as object. This is due to the works reading on one hand as monochromes, but with a densely built up surface without sharp edges. The works are painterly.

Mitelman has had a distinguished career in Australia and is represented in many public collections. He has held numerous solo exhibitions and a survey exhibition, Allan Mitelman, After-images: A survey of works from 1970-95, was held at the Heidi Museum of Modern Art, Melbourne, 1995. Mitelman has won several art prizes including the Geelong Art Prize, 1970, and the Freemantle Arts Centre Print Prize, 1976.