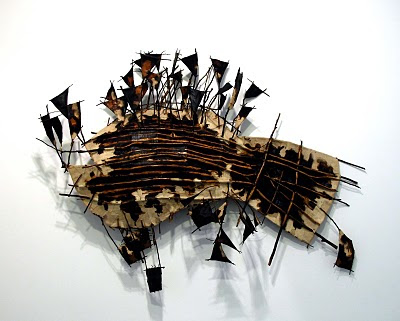 John Davis, Lake Mournoul III, 1989.
Eucalyptus twigs, paper, calico, bondcrete, bitumous paint, 92x135x45 cm.
Image reproduced from the John Buckley Contemporary Collection; Photograph: Daniel Dorall.
John Davis, Lake Mournoul III, 1989, is made from found materials - eucalyptus twigs and cheap ingredients from the hardware store which were also 'Depression' mainstays such as calico, bitumen and brown paper. Davis has chosen to use the antithesis of expensive 'professional' artist's materials such as bronze casting and oil on linen. The imagery of the fish or boat-shaped structure possibly symbolising a totem of Lake Mournoul is depicted in 'earthy bush' colours. The simple and unprofessional construction technique, suggesting 'anyone could do it', facilitates an inclusive response focused instead on the artist's ingenuity. Additionally, the realised image of the fish/boat has more to do with childlike drawing, or perhaps, Indigenous iconography than figurative realism.

Australian sculptor, John Davis, 1936-1999, exhibited widely including Melbourne, Japan and the United States. He represented Australia at the Venice Bienniale, 1978.  His work has an ephemeral quality and could be site specific (Davis often worked in the Mallee region of Victoria). Some works could be as simple as a re-arrangement of found twigs which were then photographed. John Davis' work is represented in many public and private collections including the National Gallery of Australia and state galleries in NSW, Victoria, Western Australia and Tasmania.